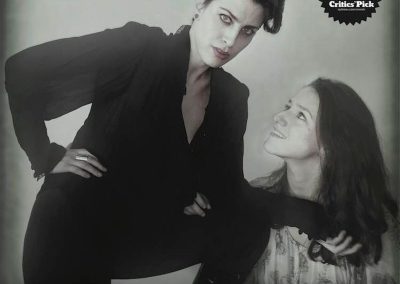 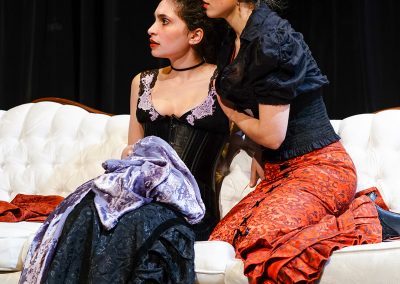 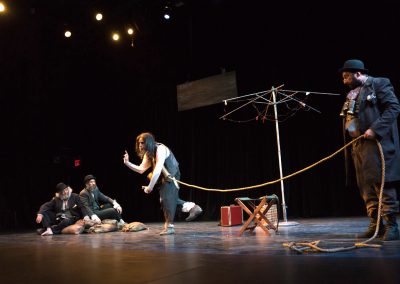 Review: In ‘God of Vengeance,’ a Nice Jewish Family Lives Above a Brothel

Questions of guilt and retribution gnaw ceaselessly at the heart of Yankl (Shane Baker), the central character in Sholem Asch’s “God of Vengeance,” which is being given a timely revival by the New Yiddish Rep at LaMaMa. A pious Orthodox Jew, Yankl makes his living in what remains a highly unorthodox profession: He owns a brothel that sits below the apartment in which his family lives.

Asch’s 1907 play, esteemed and widely produced in Europe, caused a scandal when it was staged in New York, ultimately opening on Broadway in 1923 and creating such a ruckus that the entire company was hauled into court on charges of indecency. The timeliness of this production — performed in Yiddish with English supertitles — has everything to do with the arrival on Broadway this spring of Paula Vogel’s “Indecent,” a powerful drama depicting the tumultuous history of the play and including some passages from it.

But “God of Vengeance” holds the stage formidably in its own right, primarily for its forthright depiction of the love between Yankl’s teenage daughter, Rifkele (Shayna Schmidt), and Manke (Melissa Weisz), one of the women who work in the brothel. The play is remarkable, too, in its nuanced depiction of Manke and her fellow prostitutes Basha (Mira Kessler) and Reyzl (Rachel Botchan). Although some may find that Basha’s genial acceptance of her lot is romanticized, she frankly boasts that she has freedoms, even living as she does, that would be denied her in the hidebound community where she grew up.

Rifkele, played with lovely sensitivity by Ms. Schmidt, yearns for freedom, too — the freedom to love Manke — but her father is busy arranging a good marriage for her, with the help of Reb Eli (a wryly funny David Mandelbaum), the matchmaker, who blithely brushes away Yankl’s almost obsessive sense of guilt over his business, assuring him that as long as he’s a good Jew, everything will be fine.

o redeem himself in the eyes of God, Yankl has paid to have a Torah scroll created, and his most fervent hope is to find Rifkele a respectable Jewish husband, as if by raising her strictly and setting her up in a traditional marriage, he could expunge the sense of his own sinfulness that festers in his soul. Mr. Baker imbues the character with a tormented single-mindedness that neatly defines his predicament.

The production is deftly directed by Eleanor Reissa, who is terrific in the role of Yankl’s wife, Sarah, herself a former worker in Yankl’s brothel. Now dutifully playing the role of subservient wife, Sarah properly wears a wig when necessary. It is Sarah who tries desperately to bring Rifkele back home when she steals away with Manke. They are enticed by Yankl’s procurer Shloyme (a wonderfully slimy Luzer Twersky) and his girlfriend Hindel (Caraid O’Brien, making something fairly fresh of the hooker with a heart of, well, tinsel if not gold), to start up a new stable.

The production is somewhat cramped on the small stage at LaMaMa — the cluttered set almost resembles a used-furniture shop — and the contemporary setting adds nothing much to the play. But the cast’s commitment brings the work’s flashes of lyricism to powerful life. Most moving is the scene in which the women exchange confidences as rain pours down, and customers are sparse. Basha, played with marvelous grace by Ms. Kessler, has no regrets for fleeing the marriage that was being forced upon her, but she is still haunted by visions of her dead mother.

Manke calls to Rifkele, who sneaks out of the house and joins her in the rain. They share a tender scene in which Manke playfully pretends to be Rifkele’s bridegroom and impulsively implores her to come away with her so they can share a life together. The purity of the affection between them is beautifully played, and Asch’s sympathetic depiction of their love is affecting in its honesty. Even writing in the early years of the last century, he makes it implicitly clear that in his view, it is not God’s vengeance that Rifkele and Manke need to fear — only man’s.