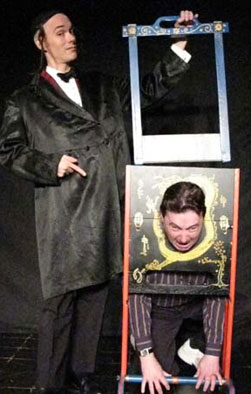 Shane Bertram Baker’s one-man show, written with director Allen Lewis Rickman, may claim to be a guide for gentiles, but it really instructs his primarily Jewish audience on how a Missouri goy came to be fluent in Yiddish performance and language. Supposedly he’s about to accept the Young Yiddish Vaudevillian of the Year award (the YYY). It’s a bit like Monty Python, if the Pythons reminisced not about music hall but Yiddish, and it makes for a silly, satisfying 75 minutes.

Accompanied by musical director Steve Sterner on piano and drummer Matt Temkin, the balding, exuberant performer in a red velvet smoking jacket tells tall tales about his entry into Yiddish vaudeville. It began when he was taken to see the re-release of the film of “Animal Crackers” in 1974: Neither his father nor his priest could explain Groucho’s “Did someone call me schnorrer?” remark. (Basically, a schnorrer is a freeloader). For Baker, the language and the laughter become linked.

Baker incorporates vaudeville set pieces throughout. He demonstrates a “haircut act,” one so bad that it’s intended to clear the theater (the name comes from the idea that the performer would only see the backs of the patrons’ heads as they exit), with silly rope tricks and creaky puns. He hypnotizes a rubber chicken. He often remarks of a vaudevillian, “He’s dead now,” so that it’s a running gag, like Temkin’s beat-late rim-shots.

When Baker does the recitations—or “word-artist” work—he’s truly powerful. These are in Yiddish, with English supertitles projected. A poem about a bullfight, in which he acts the strong bull, displays pathos and rage. A joke with a dummy leading up to a dirty punch line is delicious. I loved Yossele, the “trained” dog who won’t even answer to his name.

New Yiddish Rep, just two years old, aims to invigorate Yiddish theater through the excitement of its work, not nostalgia, according to the mission statement in the program. Baker’s fantastic nostalgia is decidedly 21st century.