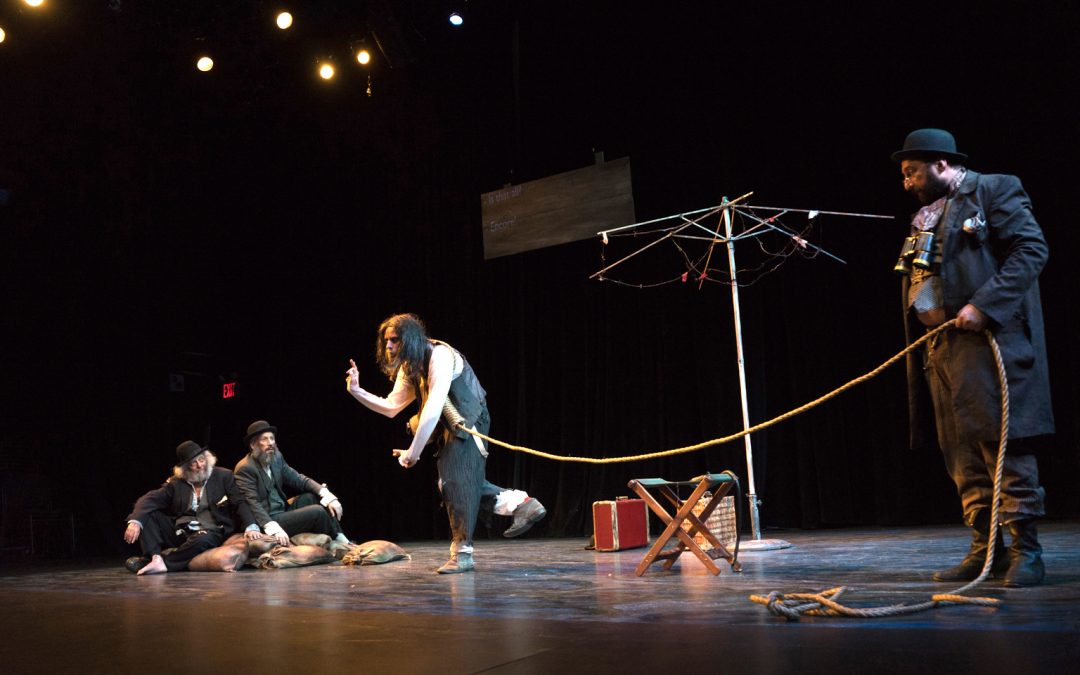 The ‘Godot’ We’ve All Been Waiting For

On a recent Friday evening, I was sitting in Manhattan’s Castillo Theatre, on West 42nd Street, waiting to see a production of Samuel Beckett’s “Waiting for Godot.”

As the house lights went down, and the stage lights went up, the play’s minimalist set came into view: a low mound and a bare tree that looked more like a metal sculpture than like a living thing. On the mound sat David Mandelbaum as the rundown Estragon, wearing a misshapen hat and a pair of torn trousers held to his body by a rope belt. Shane Baker, playing the slightly more decorous Vladimir, stood nearby. As Estragon wrestled with his boot, trying to pull it off his swollen foot, he moaned, “Me ken goornisht teeee-yen.”

Anyone familiar with Beckett’s masterpiece, now celebrating the 60th year since its premiere at Paris’s Théâtre de Babylone, would recognize that famous first line, “Nothing to be done.” The difference was that, like the rest of this performance, it was said in Yiddish.

There’s a lot that’s perfect about doing “Waiting for Godot” in Yiddish, even if we needed this production, directed by Moshe Yassur for New Yiddish Rep, to make us realize it. Through Baker’s translation and the cast’s performances — Mandelbaum and Baker outdo themselves as the existential odd couple of Estragon and Vladimir, as does Avi Hoffman as the blustering Pozzo and Raphael Goldwasser as his masochistic slave, Lucky — the New Yiddish Rep has created a distinctive work that possesses its own power while shedding new light on the original.

Yiddish, of course, is not just a language spoken by Jews, but also a language bound up with Jewish life and tradition. Thus, translating “Godot” (or anything else) into Yiddish means relocating it into a universe of Jewish reference and idiom. Here, for example, “His highness” becomes “Der rebbe reb Tsots,” and “critic” (flung as an insult by Estragon to Vladimir) becomes “misnaged.”

And when Vladimir remonstrates with Pozzo over the latter wanting to get rid of Lucky, the original comparison of chucking away Lucky “like a banana skin” becomes “shlogn kapores mit im” — that is, discarding him like the sacrificial chicken swung around the head before Yom Kippur.

The performance also locates the play within a Yiddish world through the speech and mannerisms of the actors. While Estragon speaks an earthy Polish Yiddish, Vladimir has a more refined Lithuanian accent, giving the characters’ interactions a “tomayto/tomahto” comedy. Estragon, trying to figure out what day of the week it is (and when Godot might or might not arrive), employs the singsong tune traditionally used to work out a knotty bit of reasoning in the Gemara.

Most spectacular is when Lucky is instructed to “think” and embarks on a rapid-fire nonsense disquisition, delivered here with a grandiose Yom Kippur melody.

What all this adds to Beckett’s play, however, is a more difficult question.

Brooks Atkinson, reviewing “Godot” for The New York Times in 1956, paraphrased Churchill describing Russia in saying that the play is “a mystery wrapped in an enigma.” Does rendering it into Yiddish make it less enigmatic? And if so, is that a good thing?

According to Mandelbaum, the troupe originally wanted to present the characters as Holocaust survivors in the immediate aftermath of World War II. It’s an understandable inclination, especially since Beckett, who was a member of the French Resistance, wrote the play in 1948 and ’49, and his work expresses the existential anguish of the time.

Fortunately, however, the Beckett estate nixed the idea. Despite the postwar resonance, the power of the play lies in the maddening interplay between specific references to the world we know and a nowhere quality that puts it in a kind of purgatory beyond time and space. Moving the action to a more concrete historical setting would have vitiated that hanging-in-thin-air torment, even if the historical moment was itself the hanging-in-thin-air torment of a displaced persons camp.

Even without any overt indication, Yiddish brings out this aspect of the play. Indeed, when Vladimir asks, “Where are all these corpses from?” and exclaims: “A charnel house! A charnel house!” or when both Vladimir and Estragon speak of the noise of dead voices, and how the dead “talk about their lives,” it’s impossible to think of anything else. If this makes the play more concrete, it is not by adding anything extra, but by revealing the inference contained in Beckett’s words themselves.

After the performance, a friend asked me, “So, does Yiddish theater have a future?” Trying to make a joke, I said something about having to “wait and see.” But the truth is, if the future of Yiddish theater means more shows like this one, that’s a tremendously good thing. While much Yiddish theater today — or, more frequently, Yiddish theater in English translation — focuses on mining the existing Yiddish canon, New Yiddish Rep has done something much more audacious. With “Waiting for Godot,” it has shown not what the Yiddish language has contributed to theater in the past, but what it is still able to contribute today. And that is well worth waiting for.