A refuge for refugees 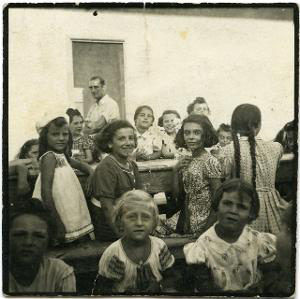 A concengtragtion camp that sheltered Jews from all over Europe.

I asked an Italian journalist  from Calabria to write up this article for Yom Hashoa. Here is the story she sent in.

Ferramonti Camp: a history of peaceful coexistence in Calabria, during the Second World War.

June 1940. Calabria, province of Cosenza, in the very south of Italy, far from the real political and economic decisions of the country, stood the Ferramonti di Tarsia: the first and largest internment camp for foreign Jews in Italy.

The little-known history of the camp through which, during five and a half years of activity, passed some four thousand Jewish citizens: Italy had just entered the war at the camp’s inception, and Jewish citizens of Italy, were considered enemies and were arrested and interned.

Even though the Ferramonti camp was freed by the British in September 1943, many inmates remained living there in the ensuing years. Chronologically, it was the first concentration camp for Jews to be freed and also the last to be formally closed.

Following the German racial laws (1933), many Jews who resided in Germany and countries under Nazi control decided to emigrate to North and South America and other European countries deemed safer. The Jews who did not have the economic means for a more distant emigration considered Italy as a “precarious refuge” towards which to go.

At the time of the promulgation of the Italian racial laws (1938) the approximately 10,000 foreign Jews present in our national territory were ordered to leave Italy. Most of them managed to leave the country, but just over 3000 foreign Jews found themselves in Italy when the arrest warrant was given in May 1940. Many of these people were brought to Ferramonti. Other European Jews soon fled from Nazism and arrived in the territories under Italian control (especially from Yugoslavia, Greece, Albania and North Africa). Next to the predominant group of foreign Jews, groups of people of non-Jewish religion, but of enemy nationality to Italy, arrived at Ferramonti: Greeks, Slavs (including some Catholics) and Chinese.

The Ferramonti camp in Tarsia was the only example of a real concentration camp built by the fascist government following racial laws and represents the largest Italian internment camp in history. The camp stretched over an area of ​​16 hectares and was made up of 92 shacks of various sizes, many of  them built the classic “U” shape and equipped with a kitchen, latrines and common sinks.

With the increase in the number of internees and the presence  diverse groups in terms of language and religious orientation (there were Orthodox and Reform Jews), the Jewish community of the Camp began to organize itself by forming an internal parliament, representing the members of the various barracks. Camp management supported the internal organization which provided significant cultural and sporting activities that helped to mitigate the extreme difficulties of life due to the presence of malaria and the scarcity of food.

1943 was the most difficult year for Ferramonti, but also the one that saw its liberation. Between September and October 1943, the entire German army  led by Hermann Göring, retreating from the south, passed a few meters from the camp. To avoid danger, the management ordered the evacuation of the Camp, and all the Jews who could fled to the surrounding countryside where they were hosted by the farmers of the territory of Tarsia. To avoid a Nazi intrusion and to protect the Jews who remained in the camp because they were too old or sick, a yellow flag was hoisted at the entrance of the Camp with the presence of the Capuchin Lopinot to explain to the Germans the presence of a typhus epidemic inside. Thanks to these stratagems, Ferramonti was unscathed  by the retreating German troops.

A total of 38 Jews and 5 Gentiles lost their lives during the period spent in Ferramonti. Ironically, the only internees to die from machine gun fire were re those killed by an Allied plane, which flew over the camp and mistook it for a hostile military site.  The aircraft fired on the occupants, killing four people and injuring 16 others at the end of August 1943. After the armistice of 8 September, the Italian authorities left the camp, and on the morning of 14 September 1943 the first British military trucks entered the camp. From that moment on the camp of Ferramonti di Tarsia had a Jewish governance. The camp was officially closed on 11 December 1945.

Today, the Ferramonti camp is a tourist site and houses a museum, inaugurated in 2004, and strongly supported by the municipal administration of Tarsia, the “International Museum of Memory of Ferramonti di Tarsia.” The exhibition halls are located in the area once reserved for the administration of the Camp. The last room inaugurated on January 27, 2015, was set up thanks to the voluntary contribution of Dina Smadar, an international artist, a former internee at the Campo di Ferramonti.

Though the story of Ferramonti is more widespread in Calabria than in the rest of the world, the region is quite proud of its part in history as is demonstrated by the events of commemoration organized by many municipal administrations, with the support of the Ferramonti Foundation.

Calabria is a special place where the Jewish culture in Italy can find a new life, exemplified by the presence of Barbara Aiello, first and only female Rabbi of Italy, who opened a synagogue in the heart of the region: in Serrastretta. In an interview that appeared in a local newspaper some years ago, she said: “At least 40 percent of today’s Calabrian population are descendants of Jews forced to choose Christianity by force or necessity. Jewish tradition calls them “anusim”, those who are forced to convert to Catholicism. And in certain customs, otherwise inexplicable, I can read the signs of Calabria’s Jewish roots: the candles lit on Friday nights, the star of David hanging on the neck of many old women; the neighborhoods that in many countries are called Giudecca (as in Nicastro and Reggio), certain New Year’s rites and Easter customs (such as the omelette and the “cuzzupa”)”. And we can add the surnames to the list. Many italians historians such as Cesare Colafemmina, Cosimo Damiano Fonseca, Rocco Cotroneo, Vincenzo Villella have always been interested in this Jewish tradition and have found traces of this past in many cities and village around Calabria as Reggio Calabria, Cosenza, Crotone, Lamezia, Bova, Castrovillari and many others.

So, as often happens, in the most remote places of the world, it is easy to encounter a culture of welcome and tolerance.  Even if Calabria today is called “tail light of Europe”, its Italian, Catholic history and its roots intertwine with the Jewish ones, making it a unique part of southern Italy.