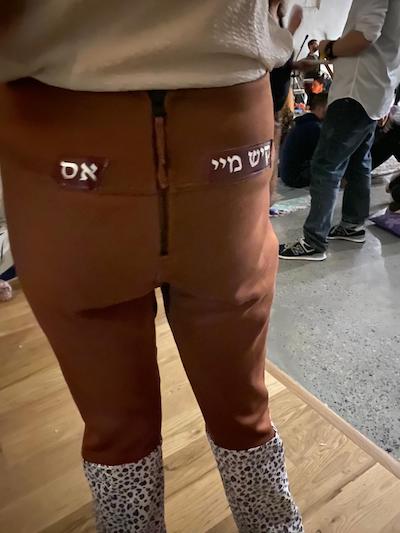 Eishes Chayil, a woman of strength, of value. The song on repeat repeat repeat as this skirt is being cut, pocked, crotch created. These lines of poetry viscerally cut me and I feel alive. The memory of this same tune in many homes and countries but always my voice in silence. The silence that made me feel safe in place. Reading, memorising studying and deconstructing these words with meforshim for the first time in high school. Shamefully, later teaching them.

I’m suddenly aware how problematic implications in these phrases hit me like first second and third waves of feminism as if for the first time. This beauty of a piece highlights and preserves the common main source of shame for women which is of never being good enough. It hurts more and I love it.

For those of us who have tried to live up to this superhuman character described in this song and gotten pretty close, the results are an unhealthy empty shell and super unattractive. A shadchan suddenly calls, “I saw you in pants and I thought of you because all the others look the same.” But Eishes Chayil was a lie because now my time has more value than to spend it with a stranger from a good family. And my inability to idealize men as much as i used to it saddens me. Closeness which I craved, now I see weakness_ their source of shame, and my idols are not as strong. It’s unsettling where to lean?

Always thought out, my reaction nerve disabled. Piha Pascha Bechochmo Vesoras Chesed al Leshona, kiss my ass. But still my most fluent language is in clothing, Kish mir in tuch…whatever.  I only ever heard Yiddish speaking men say, it’s disgusting. Kiss my ass is maybe dumb but for some reason implies power. And mixing around languages helps integrate and embody the self.

Eye roll to those who thought my pants a literal joke and ain lonu reshus lehishtamesh bohem elo lirosom bilvad?! Objectifying still. The strength it took to wear them, rather did create an aura of a candy that nobody dares to touch.

And as I navigate through the margins of Jewish circles and loop around to some other artistic circles, I become painfully aware of the long term lingering effects of segregation and otherness. The compartmentalizing of masculine and feminine I hear all the time, and we need women to sing because women’s voices are beautiful. As if men’s voices are unattractive. Did you even hear yourself? I wanted connection. To break through. I ask to examine. How dare I question a singular uncommon man’s advocacy of Kol isha in the semi ortodox world?! And as I go through the five stages of feminism, denial, anger, bargaining, depression and acceptance, I’m grateful that I can use other languages too now beside clothes.