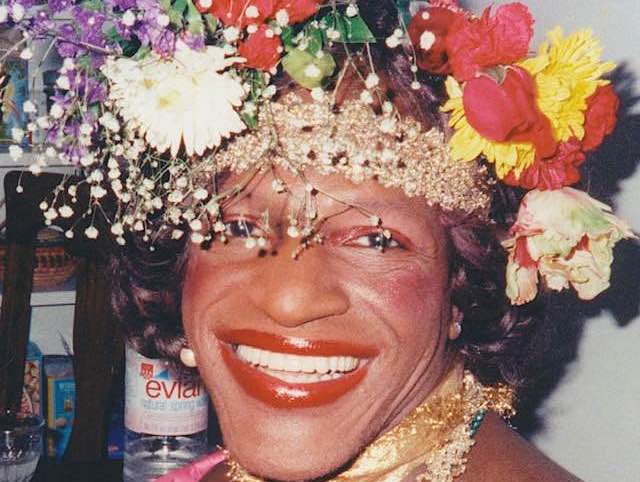 A friend of mine called me about a month ago and said she’d been scrolling through her news feed and had come across something she thought I might find interesting. ”Do you know who the Governor is naming a Brooklyn park after?” She asked. It took me barely a minute to hit on the answer. “Marsha P. Johnson. Am I right?” “Bingo,” my friend affirmed.

I first met Marsha P. Johnson in the late 1980s at the iconic NYC experimental theater The Theater for The New City. Marsha and I had been cast in a new Hot Peaches musical called Concentrated Camp. The Hot Peaches was a drag theatre company founded in the early 1970s by playwright/lyricist and collector of downtown characters, Jimmy Camicia. The company was known for its farcical romps, outrageous costumes, outrageous personalities, and gay political content.  Jimmy’s shows explored the many issues affecting the LGBTQ community (a term that, back in the day had not been invented yet) with a particular emphasis on the plight of the drag queen.

I’m not sure how I ended up in the troupe.  I am not nor have I ever been a drag queen as far as I know. However, soon after my husband and I had met Jimmy Camicia through a director friend I found myself draped in boas, sequins, and fake eyelashes, singing songs with titles like Chicks With Dicks and Pink Cupcakes. The Hot Peaches rehearsal process was a notoriously haphazard affair and it was especially so when Marsha was involved. She was a street queen-diva par excellence and being punctual was no concern of hers but making an entrance was. She’d stride into rehearsals hours late featuring a wide and glorious smile on her face donning outfits that were beyond. Her ensembles were adorned in a cacophony of tchatkes that consisted of a myriads of plastic flowers, rhinestone everything, sequins, Christmas ornaments, costume tiaras, and an array of found objects she had picked up from the streets of New York.

At the time of our meeting, Marsha had long been a fixture of the downtown New York scene. She had wracked up an impressive list of accomplishments. Andy Warhol had photographed her, she was a political activist who had spent years advocating for the rights of her drag queen sisters and others in the gay world. Legend had it that on June 28th, 1969 Marsha had been one of the first to throw a shot glass at the NYC cops thus going down in history as an initiator of the Stonewall Riots. The Stonewall Riots now recognized as a turning point in the battle for gay rights erupted after decades of harassment by NYC cops who had been given Carte Blanche to raid bars known to cater to gay and drag queen clientele. The Sodomy Law of New York afforded law enforcement the license to arrest those they’d deemed “deviant”. With Marsha at its helm, the Stonewall riots were a catalyst in dissembling New York’s stringent anti-homosexual laws. Unfortunately, Marsha’s activist activities did not pay the rent and she’d often have to walk the streets to make a living.

The Marsha I knew during my Hot Peaches days was not the first person I’d imagine to go on to gain worldwide acclaim of nearly mythological proportions, and be hailed as a saint of the LGBTQ community. The Marsha I knew was an eccentric character, warm-hearted, and slightly mad- sometimes a bit more than slightly. I have vivid memories of her performances with The Hot Peaches. She never remembered her lines or blocking. She’d improvise with whatever was in her head at the moment. There was a ditzy I Love Lucy quality about her and even though, when she sang, it was in the key of Z,  her natural comic timing made her performances work. I never could figure out if her off-kilter stage persona was intentional or not.  Offstage she had a free association way of communicating. Much of what she said was difficult to decipher but every so often she could be crystal clear, coherent, especially when it concerned gay rights issues.

The last time I saw Marsha was in the early 1990s during a Hot Peaches gig in London. We had just completed a month of performances and were set to return to the states. After the last show Marsha came up to me and my husband in a frantic state asking if we would please travel back with her to New York. She seemed scared and desperate, and we quickly changed our tickets to go back with her. The day we left London Marsha was dressed in male attire. This was the one and only time I saw her wear men’s garb. She looked  uncomfortable in her too tight pinstriped suit and bow tie. She told my husband and I that she was wearing male drag because she was afraid of being harassed by airport security. We thought she was perhaps, being overly dramatic. After all, things were different now than back in the old Stonewall days, weren’t they? All went well with security at Heathrow but when we arrived at customs in New York, Marsha was flagged down. A bunch of macho customs officers demanded that she open her bags. They searched through her luggage and every time they came upon one of Marsha’s drag pieces they laughed, snickered, and made demeaning remarks. My husband and I were furious. Marsha, however,  just wanted to get through the ordeal. In the cab we shared back to the city Marsha stayed quiet. I never saw her again.

It was sometime in the summer of 1992 that Jimmy Camicia called to tell me that Marsha’s body had been found floating in the Hudson River.  The police, he said believed her death to be a suicide and were quickly wrapping up her case.

In the years following Marsha’s death many of her friends and fans have remained convinced that Ms. Johnson was murdered. In 2017, a documentary entitled The Death and Life of Marsha P. Johnson  chronicled the LGBT activist Victoria Cruz  as she forged her own investigation into Marsha’s death. At the films end no definitive cause for Marsha’s demise was established However, there questions were raised as to whether Marsha’s marginalized status as a black drag queen left the police uninterested in pursuing all possible leads. I guess some things never change.

Over the years, in memoriam, Marsha has become famous, an inspirational icon for the LGBTQ community. Movies have made about her, statues have been erected in her honor, university courses are dedicated to exploring her place as a pioneer in the history of the gay movement, and soon there will be a park named for her. Last month she graced the cover of Time magazine as one of the “100 most influential women of the year. To be honest, her belated fame has oft times baffled me. Out of all the fierce and fantastic queens of her time, why her, why Marsha?

Marsha was, undoubtedly a fiercely unique individual, a mixture of quirky, crazy, and profound. A natural comedienne and an on the front lines, unrelenting, and outspoken gay activist, she was unabashedly who she was.  With her commitment to proudly embrace  her gay and transgender identity, she was a non-binary warrior and she was ahead of her time. As she once said. “We  have to be visible. We should not be ashamed of who we are”. So, to answer my own question, why her? That’s why.

If only she was around to witness her fame and glory. She would just plotz!