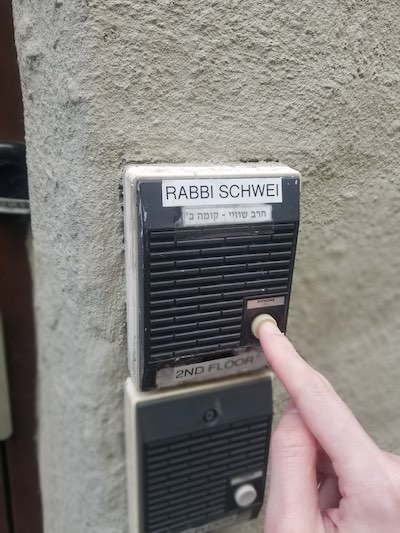 I don’t want my grandfather to die.

I’m just not ready. I know, when is anyone ever ready to let go forever? But not now, it’s the worst time. I haven’t gotten time to change him: my grandfather. To make him happy with me. I’m just in the midst of destroying every remnant of the relationship he thought he had with me and I haven’t gotten enough time to rebuild myself and come back and make him love. Me. Nothing was ever enough. Him and I couldn’t seem to ever have happiness. Not at the same time for sure.

So far, his last spoken words to me were when I rang the bell. I needed to pick up something from the house. “It’s me,” I answered to his “who is this.”

“Why did you say ME?” He asked, avoiding eye contact when I got upstairs.

“What do you mean?” I asked

“farshstaist doch vos ich main, es iz nisht dir.” he replied. “You understand what I meant- it isn’t you.”

Damn. I had even put on a long skirt with long sleeves. Okay, my toes were showing. But still, NOTHING is ever good enough for him. The family calls it high standards, I call it his disease. He projects it onto me, his childhood trauma and anxiety. His illness he calls religion. I have it too, and I feel helpless. Because there is nothing I could do to cure him. I can only save myself and drop his god, the god of my fathers.

I walked out of the  house thinking that perhaps I had closure and I’m ready for him to die because to him, I was already dead. And there was no way for me to say I’m here, even in a long skirt.

But I was wrong. I’m not ready. No, not like this, and it’s not even because what will I say after, I’m not ready for me.

Yesterday he went into cardiac arrest. My grandfather is recovering, but even if he does, will I be able to go back to the olden days? Just sit, shmooze, and sing together? Is there a way to break through broken relationships, deep mistrusts, and be able to be light in spite of fundamental opposing values?

Yesterday at 2 am, I woke up in a panic. Was my grandfather thinking of me through his sedation? I just felt darkness, and I needed to know he’s alive. I texted a few of my aunts to ask about him.

It’s hard to swallow my pride and ask about him. Do they blame me for Zaidy’s stress? For his unhappiness? For his pain?

I’m not so innocent; there is no one who I hung up the phone on so many times. Five months ago I blocked his number. Okay, I asked for it. On one occasion he thanked me for coming to a cousins Simchah, and hoped to soon come to mine.

“You will be tzniusdik, so you will be happy, un ale velln zich freien mit dir, everyone will be happy with you.” I got fed up, and tested him. “Will you still come if he isn’t jewish? He can convert.” No, but then I would have to be frum, that wouldn’t work.

Okay, I probably won’t go for that. Truthfully, I never dated a non jew, but I’m not oppose to it ideologically. I just wanted to wake him up, that an event of mine would probably not have a mechitzah or Jewish music and only speeches by him. It would’t be a cookie cutter format like he has in his mind. And would he still be a part of it? Of my life?

I hung up. Because that’s my limit. I won’t interact with that.

After a number is blocked, they can still leave voicemails. My grandfather would leave me weekly voicemails with long speaches of how mentally ill I am, how people who have such thoughts take medication. Sexual thouths? Sleeping with a goy thoughts? Frei thoughts? I don’t know exactly what thoughts he thinks I have, but I think I understand his idea of the root of mental illness. Avodas Hashem, the most attainable is the opposite of illness. Frei equals crazy and childhood abuse and neglect can be chasidish. I think we might have the same idiom, we only switch around the words. We cope differently.

To him, leaving yiddishkeit, is leaving life, a clear symptom of mental illness.

Lately his attempts to regain contact with me sounded more desperate. But still, like at the pace of a snail trying to stop a ticking bomb. “Ich gei dir nish zogn vi medarf zein.” I wont tell you how one must be. Just tell me if you are alive,” his voicemails said.

It’s weird, I see prayers for Rabbi schwei, in the news. Everyone say Tehillim. So many relatives. But some say to me that Zaidy only cares about me, that is also my fault, because they also mention that they don’t like talking with him because all he does is divert the conversation to ask about me. I hear that every time there is a simcha, instead of being happy, they say he reacts disappointed that it wasn’t this Bunia. It’s always been like that. and I’m not even saying tehillim. Sure, my thoughts are with him, and perhaps his attachment to me is not only because of being the first grandchild and the first to carry his mothers name. Maybe it’s also because me, because I talked to him like a human; I never treated him like a torah puppet.

I’m going with my Bubby to see him tomorrow. I’m nervous, because every time he or my grandmother were ill in the past, he would call me and say he’s dying, I need to get married to make him happy. I would find out if they were sick enough or not. I hated when they use illness to guilt me. Force me to listen to Yiddishkeit speeches, and help them perform all the frum ocdness customs which are hard to do while sick… Starting three years ago,  if they were sick, I stayed away, even when my relatives tried begging that Zaidy asks for me. I wasn’t engaging in the Zaidy is sick now come make him happy, because you will regret it when he passes.

Tomorrow I show up, he wasn’t awake to ask for me, but I don’t know what scarres me more, if he’s awake or not. What will he say to me? Will we make peace? Who wins the stubbornness contest? What will his legacy for the family be? Will his control over the minds of his children be stronger or weaker after? Will it bring the family closer or apart? Is there anything he can say now that will help? Is there a way I can ask him to say anything that can promote unity and individuality in the descendants? I need time, because I’m not even ready to talk with him at all. And who am I even. I’m his back stabber. Literally, I’m told that, by my father, when I show emotion towards him with the complex relationship that we have. That’s what you do, when you are not tznius, you stab your grandfather and why do you even cry when you don’t regret it.

He is sitting on the bed post-extubation. He can’t speak yet but his face lights up in joy when he sees me. In that moment there is no “now you come?” He lifts his wired hand to his forehead in a salute motion and I don’t exactly know what that means if it’s like the good morning nod the Rebbe would do for the goy or if it’s thank you I knew you were a ment ch at the end of the day, or just something nice he knew I would like. Because it would be the only simple acknowledgement I remembered from him.